The fastest players on two cleats

By Katie Faulkner and Brenda Shafer

These guys smoked opponents from the line of scrimmage, outran them in the backfield, and flew past the pylons at a dizzying pace. Many were track stars in the off-season, with multiple state champions among their ranks. With 40-yard dash times (and 100-yard dash times decades before) that would shine at a combine, or stories of speed that inspired entire offensive assaults, check out some of high school football’s fastest athletes. NFL player Sammy played his first snaps of football at Ooltewah under coach Benny Monroe. As coach Monroe recalls, “He had never played any football before, and he was a good size. We worked for his entire freshman year to get him eligible to play for us, after he moved here from Louisiana. Now, Sammy didn’t have great hands in the beginning, but he could run like a deer – I mean he could fly! We finally got him eligible and played him in defensive positions like corner back and safety for a couple of years. He was a phenom at track. Just raw, pure talent!” Over 60 years later, Ellis still holds the Baylor record for the 100-yard dash. While at Baylor, he was the second fastest high school sprinter in the nation. As a running back, Ellis lettered and was named to the All-Prep Football Team in 1953 and 1954. Gene Etter remembers his father, legendary Central coach Red Etter, being afraid of Ellis when Central had to play Baylor. Ellis also holds the Baylor record for 220-yard dash, and he went on to run track at the University of Florida, winning three different SEC 100-yard dash titles. Sam holds the fastest 40-yard dash time at South Pittsburg. Sometimes referred to by his teammates as “Superfly,” his ability to fly toward the end zone ranks him among the Chattanooga area’s fastest high school players ever. He was so quick that running to the outside was almost a sure thing, so it took a bit of coaching to train him to hit the hole. As Sam recalls, “One year, during our game against Boyd Buchanan, I broke loose for a long touchdown, and while I was running I turned around and waved at their safety who was supposed to be covering me. Coach Grider didn’t like that, so he sat me on the bench for the next possession.” Sam trained with weighted shoes and ran countless bleachers, but at the end of the day he was also very naturally talented. Nicknamed “Deuce” for the number two jersey he donned, Josh would rarely be number two at anything that required speed. Naturally quick, his coaches encouraged him to work out more in the off-season to hone his talents, which he eventually picked up on later in his high school career. Squats, power cleans, dead lifts, and sled pulls all contributed to Josh’s improved 40 time from a 4.48 to his final high school time of 4.42. Josh recalls a play that best exemplifies his speed, “My senior year against Franklin Rhoads Academy, we ran a play right before the end of the first half. We were about 80 yards out with just a few seconds left, and I ran it in for a touchdown.” Twin brothers Kevin and Keith used their speed to rack up points and set records. They competed with each other regularly to improve their speed and skill. “We had a really high work ethic and a confidence in our running ability that helped us,” Kevin explains. “We knew that no one would give us better competition than each other, because we both wanted to be the best so badly,” he laughs. To train, they did box jumps, jumped rope, and implemented plyometrics. Together, they set the record for the most touchdown runs over 50 yards in a season. They rushed for over 4,000 yards and had close to 100 combined touchdowns. C.J. broke McCallie’s record for the 100-yard dash, which had previously been held by Olympian Michael Bingham. Nicknamed G6 for his speed, C.J. won state in several track events his junior year, which was only his first year running track.  Currently, C.J. plays for UTC, but he couldn’t have made it without coach Henderson helping him increase his speed at McCallie. “During my freshman year, we worked on my 40 times, and I ran a 4.8 or 4.9,” C.J. recalls. “I trained with coach Henderson, my strengths coach, on getting faster and more explosive and agile, and by the end of spring, I got down to 4.5.” C.J.’s speed on the gridiron was unmatched, “I remember one game my senior year: I caught a sling pass in the backfield and beat everybody down the sideline. They couldn’t touch me.” Ed “Buddy” Hammonds used his speed to intercept passes from the opposing team. “When we played East Ridge, I remember intercepting a pass and running for 93 yards to score a touchdown,” Ed recalls. “Sometimes, the coaches put me on offense to take advantage of my speed.” Ed was a part of the Howard ’67 team – they won the city league, country league, and Strawberry Bowl that year. “We beat Central High that year. We were the first Hamilton County school to beat them in 40 years.” Ed also ran track; he won state in the 100-yard dash and went on to win the ’73 NCAA Division 1 in 9.3 seconds in college. Eddie Lawson’s speed on the gridiron had both Alabama and Tennessee after him his senior year. “We had several DI players. I ended up signing with Tennessee. I really wasn’t much of a side stepper, but I did have some speed,” Eddie recalls. “I just hit the hole and headed north and south.” Eddie recalls a game against Tyner his senior year. “The first two times I touched the ball I got a touchdown, and I had four that night.” He had over 100 yards rushing just from the first two touchdowns. He finished the night with 15 carries for 233 yards. In the off-season, Eddie spent time in the weight room and did a fair amount of conditioning and plenty of sprints. Dante Hickey ran a 4.4, which coach Benny Monroe says was extra impressive since he was a bigger guy. “I remember in the Maryville game, he scored four touchdowns, and he only touched the ball four times!” Monroe exclaims. “He really could make big plays, and that’s what you’re looking for as a coach – playmakers.” While Dante could score, his forte was defense. “He was a great safety!” Monroe says. “At the time he played, he was considered one of the best in the area.” With Dante’s speed and strength, he was a force to be reckoned with – on offense and defense. Raquis Hale says that while he wasn’t a 4.3 runner, he tried to be more balanced and just find the open field. “Coach Grider told me I had something other players didn’t. He told me my vision was to see a hole and find that open field,” Raquis recalls. During his junior year, they lost to Boyd Buchanan, 13-6, during a thunderstorm, ending a winning streak. In the rematch the next year, South Pitt won, with Raquis racking up 14 carries for 214 yards. “The news the year before said ‘South Pitt beaten in a thunderstorm,’ but about the rematch, they said, ‘Boyd beaten by Hale storm,’” Raquis laughs. Raquis’ best game though was against Gordonsville during the playoffs his senior year, where he had 30 carries for 320 yards. “My track coach helped me a lot my freshman year. He told me my form was wild, so I practiced form, keeping my elbows in and just running from a low center of gravity,” Raquis remembers. “It really paid off.” For many years “Lighting” Leon was known for his prowess as a track athlete. Leon held the 100-yard track record on a cinder track for 10 years. His son David says, “I remember a story, and I don’t know how true this is, but his former track coach relayed it to me. He went to Central which had a cinder track, so when he qualified for state, McCallie let him train on their track. So he was practicing over there and ran the 100-yard dash in under 10 seconds. He did it twice, and the McCallie coaches didn’t believe it, so they asked him to do it again. He ran the same time three times in a row.” On the football field, under coach Red Etter, he thrilled fans with blazing runs and breakaway carries. Running track in the off-season helped Gerald Riggs Jr. increase his speed. “I could really tell a difference once I started track in high school,” Gerald says. “My friends would joke around with me, and when we watched film, they’d yell out, ‘track speed!’ when I got the ball.” During a game against Cleveland, Gerald caught a kickoff and outran everyone for a touchdown even though Cleveland’s special team was also filled with track runners. “My track coach in high school was Stanley Jackson, and he was the guy that was instrumental in pushing me to the next step,” Gerald says. “In the off-season, I would also lift with my dad, work on proper running techniques, and work on mental training to tap into that speed.” 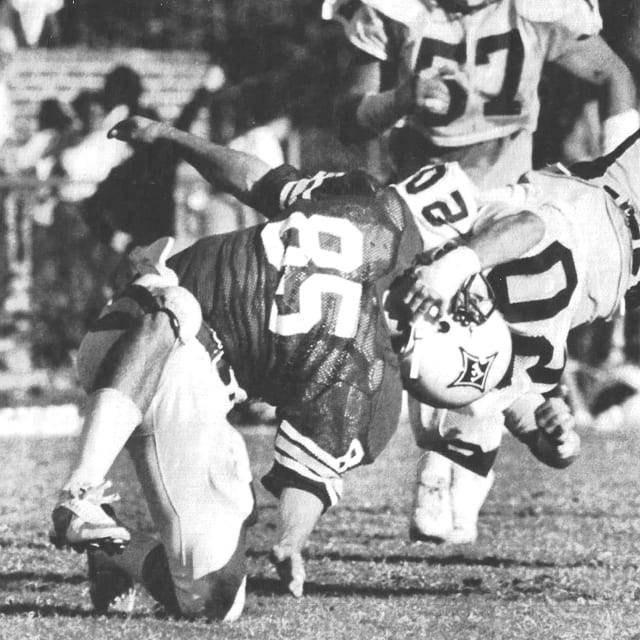 Gary Woodburn used his speed to blow by players like NFL Hall of Famer Reggie White. “During my senior year against Howard, I scored five touchdowns, and this was when Reggie White played. I would run up the middle pretty much every time and trust my offensive line to make a hole. White played a defensive tackle position, and we’d run it right at him because if you ran it sideways on him, he could cover that better than anybody,” Gary recalls. Gary’s low center of gravity helped his speed, “I worked hard in the weight room to strengthen my lower body, and my low center of gravity helped. I just think I should have stretched more. I could have been faster if I was more flexible!” Not only was Clevon a football star, he was also a standout speedster on the track, where he excelled in the 100-yard dash with a time of 9.7 seconds. According to friend Herman Prater, “He told me when he was a young boy that he saw a track meet at Howard School where Frank Jarrett ran the fastest time in Chattanooga, and he wanted to be just like him.” Running track helped him develop in football, where he became known for his shifty, dazzling moves out of the backfield. He was co-captain in 1963 and captain in 1964 of the Hustlin’ Tigers football team. Even before he reached high school, Edgar Montgomery’s speed earned him the nickname “TD” when he played at Our Lady of Perpetual Help. Edgar’s speed allowed him to reverse directions and still beat the defense. “During my senior year against Grace Baptist, we ran a counter play, but the hole was blocked. So I ran around to the other side of the play to go about 70 yards for a touchdown,” Edgar remembers. “I did a lot of training to try to improve my speed and agility. During my junior year, we trained with DI and did a lot of ladder drills and sled drills. My cousin, who ran track for Tennessee State, gave me a lot of drills my senior year. I also trained with Rick Wick at McCallie, coach Roger Woods, and coach Al Rogers.”